Dr. Kent Brantly shares his story of recovery from Ebola 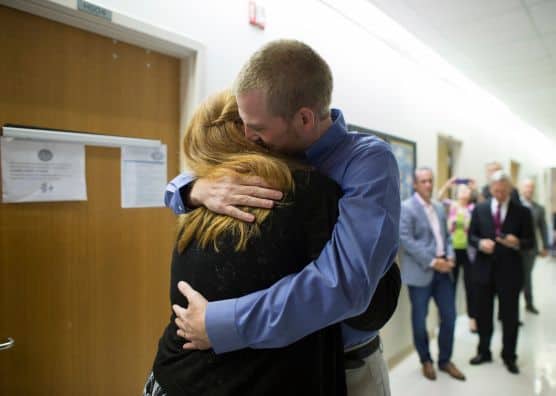 Dr. Kent Brantly shares his miraculous testimony of recovering from the Ebola virus on NBC and in TIME magazine.

When Dr. Kent Brantly contracted Ebola while working with Samaritan’s Purse in Liberia, no one knew if he would live to tell to tale. By God’s grace and with the help of the talented medical team at Emory University Hospital, Dr. Brantly recovered from the virus that claims up to 90 percent of its victims.

Dr. Brantly and his wife, Amber, shared their miraculous story of faith for the first time  during an NBC News special, “Saving Dr. Brantly-The Inside Story of a Medical Miracle.”

TIME magazine also published a first-person account of his recovery called, “This is What it Feels Like to Survive Ebola.”

Dr. Brantly was working at ELWA Hospital in Liberia through World Medical Mission’s Post-Residency program before the Ebola outbreak earlier this year. He wanted to serve overseas because of a strong call from God on his life for medical missions. When the deadly virus hit, he didn’t want to run away from the issue.

“Africa is a place of great medical need,” he said. “Liberia, in particular, has a health care system that was severely damaged during the long history of war and civil conflict.”

Even before the Ebola outbreak, Liberia had experienced severe medical hardship. It ranked eighth in the world for number of women dying during pregnancy or from causes related to childbirth, and in general, the medical care was lacking. On average, there was one physician for every 100,000 people in Liberia.

When the Samaritan’s Purse team heard of the first reported cases of Ebola in Monrovia, they decided to prep themselves and the facility in case of an outbreak. As the virus rapidly spread, their initial preparation efforts ended up being a vital component in saving lives.

“Many clinics and hospitals around Liberia are truly unable to treat patients with Ebola because they don’t have any means to protect themselves,” Dr. Brantly said when the Samaritan’s Purse team first joined the battle against the virus. “They run out of gloves, they don’t have barrier gowns, [and] they may not even always have running water. But at ELWA Hospital, we have had the support and resources of Samaritan’s Purse, that allowed us to set up a functioning isolation unit with all of the personal protective equipment needed to care for patients with this highly contagious, deadly disease.”

When Dr. Brantly first started feeling under the weather and displayed the early symptoms, including a fever of 100 degrees, he immediately isolated himself. Though he tested negative for Ebola twice, he waited to ensure the safety of those around him. The third test came back positive.

As the virus ravaged his body, at times, he felt like he would die. But he still maintained his faith and prayed God would be glorified through his life or his death.

“It is a frightening thing to know you are encountering the most deadly virus known to man,” he said. “I have been called by God to serve Him with the gifts, skills, and talents He has given me. And He called me to serve Him in places where the need is great and others may not be willing to go. I am confident in this calling, and therefore I can be confident in my current circumstances.”

You can click  “NBC News-Saving Dr. Brantly”  to view Dr. Kent Brantly’s testimony of how God saved him from Ebola. And please continue praying for Liberia’s recovery after this deadly outbreak.

World Medical Mission—the medical arm of Samaritan's Purse—places volunteer Christian physicians, dentists, and other medical professionals in mission hospitals around the world that are often desperate for staff. Not only do our volunteers offer physical relief to the suffering, but they also have the opportunity to share Christ with their patients.
DONATE