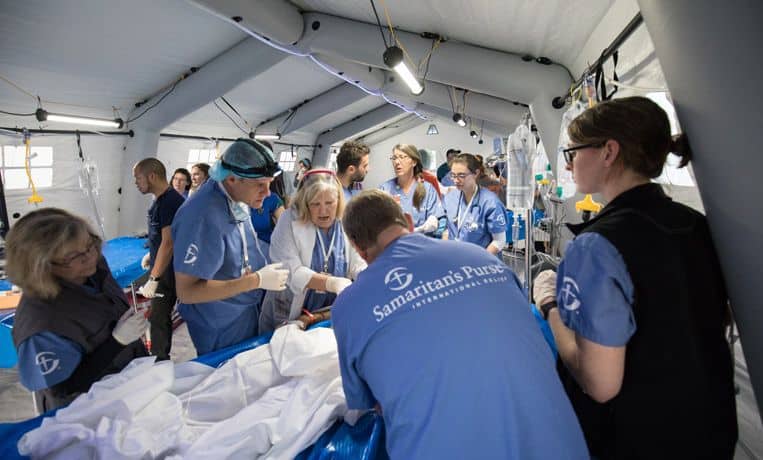 Our DC-8 was loaded with aid to help those suffering as a result of the conflict in Mosul.

Samaritan’s Purse has airlifted relief supplies to northern Iraq from Greensboro, North Carolina, aboard our DC-8 aircraft. These supplies will benefit our emergency field hospital on the Plains of Nineveh.

Samaritan’s Purse has airlifted relief supplies to northern Iraq from Greensboro, North Carolina, aboard our DC-8 aircraft. These supplies will benefit our emergency field hospital on the Plains of Nineveh.

Franklin Graham officially dedicated the 50-bed trauma unit in a ceremony January 12 with Iraqi government officials and United Nations representatives. The hospital staff is providing expert trauma care to adults and children injured in the battle between Iraqi and coalition forces and ISIS militants in Mosul. 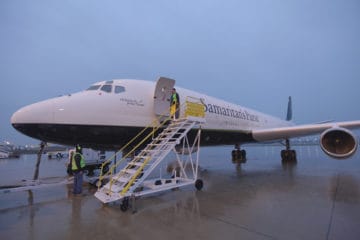 We are treating those with severe wounds from mortar rounds, car bombs, and sniper fire. About two-thirds of patients arriving at the field hospital are critically injured and likely would not have survived the one-to two-hour drive to Erbil—the location of the closest trauma center before ours opened.

More than 300 patients, from infants to an 84-year-old, have been treated at the emergency field hospital so far. Many are women and children. Since the facility opened, our medical team has performed more than 140 surgeries.

The emergency field hospital arrived in Iraq on a charter jet Christmas Day and has an emergency room, two operating rooms, and pharmacy.

Please pray for our staff and medical personnel as they care for hurting people. Pray that patients will see Jesus in us.

More than 160,000 Iraqis, about half of whom are children, have been displaced from Mosul since the nation’s security forces and others began an offensive to retake the city from ISIS control in October 2016. Some of them have now returned to Mosul or nearby villages. 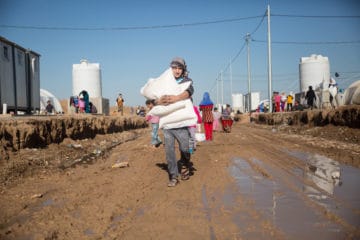 Samaritan’s Purse and the World Food Programme have distributed more than 2,600 metric tons of food to Iraqis.

Samaritan’s Purse is responding by distributing food to these vulnerable families. In partnership with the World Food Programme, we have distributed more than 3,100 metric tons of food to tens of thousands of Iraqis in camps as well as surrounding villages that are now free from ISIS control.

Samaritan’s Purse has also distributed around 5,000 pieces of tarpaulin, more than 25,000 blankets, about 1,700 cook stoves, and 7,500 jerrycans. We have built 22 latrines at a reception center for displaced Iraqis.

Although the Iraqi government now controls eastern Mosul—a major milestone in the military campaign—that area is still subject to various kinds of attacks from ISIS. Also, an estimated 750,000 people are living in western Mosul, which remains under ISIS power. Iraqi and coalition forces are expected to begin an offensive in the coming weeks to reclaim western Mosul.

Please pray for all the Iraqi families who have fled for their lives during the conflict.