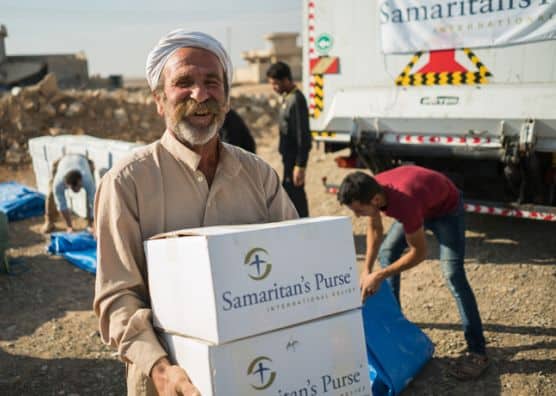 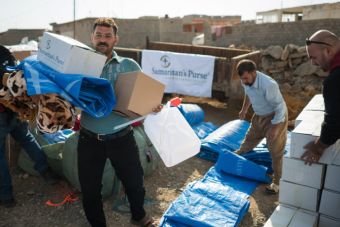 How had Samaritan’s Purse been responding in Iraq prior to the situation in Mosul?
Samaritan’s Purse had a number of projects ongoing in northern Iraq for several years. These have included protection and WASH [water, sanitation, and hygiene] but also assistance with building a new school. All the original projects are to continue whilst we are responding to Mosul.

What is the current situation in Mosul and surrounding areas?
The Iraq government anticipated that up to 1.5 million people could leave the city. They have built large long-term camps to house these people. In order to liberate Mosul, the surrounding towns and villages needed to be taken and any remaining peoples moved to safety. Some of these were Christians whose houses and churches were totally destroyed.

How is Samaritan’s Purse responding right now?
Samaritan’s Purse is responding in a number of ways-feeding in the camps, providing blankets and hygiene kits, and we have turned out twice during the night to provide emergency food and water near to the front line of battle where civilians were stuck.

What are you seeing, and what are fleeing families telling you?
When the people first started arriving, they were in very small numbers, and I had more time to talk to them. I am seen as an old man, which appears to make communication and trust easier for those who have suffered, especially amongst older men. The demographics were an early indicator of what was happening-mostly women and very young children plus old men. Boys of most ages and fighting age men-there were few.

“He did not expect to be treated so well by Christians who were waiting to help him.”

One old man grabbed me, kissing me, praising my God for his release. He had been forced to witness the execution of all the male members of his family. He did not expect to be treated so well by Christians who were waiting to help him. I have always thought of Arab men as strong and very proud. As in Greece, many, including this man, were in tears. 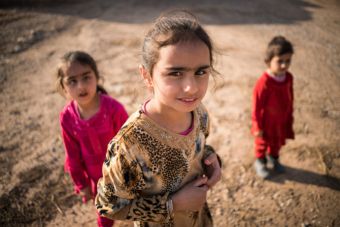 Families displaced by ISIS are just beginning to return to home.

Children arrive with fear on their faces. Nobody can be trusted. As a grandfather of four little ones, I try to break this down. Playing with them, smiling, and including them helps.

The boy in the CNN report [where I was quoted] managed to avoid death with all the rest of his family because he was so small. One of the men who came out with him told me that they had been released by ISIS after watching others executed. They walked out under a white flag toward the Iraqi soldiers, and when they were almost there, ISIS gunned them down from the rear. He is now unaccompanied but being looked after and protected in the camp. When I see him now, he openly smiles, but what does he remember?

How can we pray for and support those in this situation?
Prayers are needed to help people to get out alive and for the soldiers who face not just ordinary weapons of war but IEDs (Improvised Explosive Devices) and hidden traps designed to kill. [Samaritan’s Purse staff members on the ground] are coming to a heavy pressure time with feeding. It would help us all if the weight of your prayers was behind us.