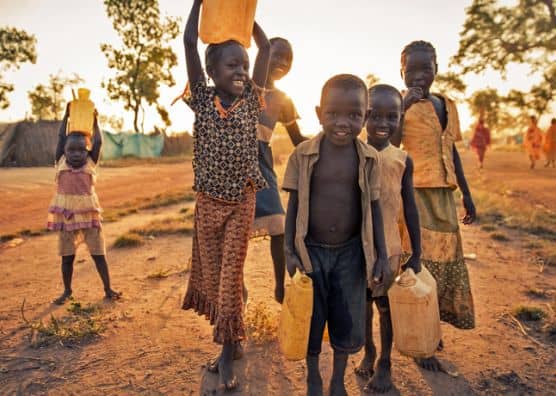 Samaritan’s Purse continues to help meet the needs of hundreds of thousands of people in desperate need.

December, 2014—It’s been a tough year for the people of South Sudan.

Political conflict between rival factions in the capital, Juba, took an ugly turn in December 2013 and violence spread throughout the country. Tens of thousands have been killed.

The nation, still the world’s newest, remains fractured. The continuing turmoil has displaced about 1.9 million people, cutting off many from normal food supplies and basic services. Reports indicate some are surviving on leaves, grass, and porridge made from water lilies.

All this comes as nearly a quarter-million refugees, mostly from Sudan, are struggling to survive in South Sudan.

“[This year’s violence] has increased the need throughout the country,” said Brock Kreitzburg, South Sudan Country Director. “It’s more difficult logistically to provide service to those who have been displaced. Many of the roads are no longer accessible because of the fighting.”

Nevertheless, Samaritan’s Purse perseveres to help relieve the suffering. Our work, done in Jesus’ name, is saving lives now and for eternity.

“People are open to the Gospel here in South Sudan,” Kreitzburg said.

Samaritan’s Purse is working in a number of locations and providing relief in a variety of ways. Here’s a rundown of some of our programs:

The Yida refugee community numbers around 73,000 individuals, primarily people who have fled the Nuba Mountains in Sudan. They left their homes due to the destruction and havoc wrought by that country’s Khartoum-based government.

Samaritan’s Purse is the only UN Refugee Agency’s Water, Sanitation, and Hygiene (WASH) partner for Yida, which is located in Unity State about 15 miles from the Sudan border. We maintain 14 of the 15 boreholes in Yida, providing over  one million liters of clean water per day. We also offer hygiene training, distribute hygiene items, and provide sanitation services such as latrines.

In collaboration with the UN World Food Programme, Samaritan’s Purse also manages and distributes monthly food rations—lentils, sorghum, oil, salt—for the entire camp as well as a nearby settlement of  more than 14,000  other refugees. In total, we are responsible for ensuring that more than 80,000 people receive over 1,200 metric tons of food each month.

In addition, Samaritan’s Purse provides vouchers  that enable  camp residents  to mill up to half of their sorghum ration for free. Milling the sorghum allows them to cook a better variety of foods and helps it last longer.

We also run a nutrition center and five mobile clinics that offer malnutrition screening and treatment for young children and pregnant and lactating women. Our interventions are a significant factor in reducing the percentage of malnourished people in Yida.

Samaritan’s Purse has an active ministry team here that is investing in the spiritual lives of the young and old.

“The ministry team is teaching both Christians and Muslims alike to read the Bible through our literacy courses,” said Tim Carter, Area Coordinator. “We are also partnering with local churches to show the Jesus film as an evangelism tool; offering prayer and support for refugee families who are suffering; distributing Bibles in the local language; and training church leaders. We are currently making preparations to begin a sports ministry program in order to develop young disciples of Christ who will become the leaders of the next generation.”

In another location further south, Samaritan’s Purse conducts monthly food distributions for more than 21,000 South Sudanese affected by the political conflict. We have also provided approximately 23,000 people with seeds for planting and have installed two surface water treatment systems that now provide access to clean water for an estimated 4,000. Hundreds of children and mothers have been admitted to our targeted supplementary feeding program.

Our aviation team, based in Eldoret, Kenya, provides significant logistical support to our work in South Sudan. Many areas, including Yida, are often inaccessible by road. Utilizing three planes, including a DC-3, the team shuttles both personnel and supplies to our various bases on a continual basis.

Here Samaritan’s Purse operates the only currently functioning surgical hospital in the entire state. In March we completed a major construction project—a new operating theater and radiology block—to upgrade and improve services offered. Dr. Evan Atar and the rest of our medical team work tirelessly to serve the extraordinary needs of the surrounding community.

We distribute food—more than 1,500 metric tons each month—to nearly 90,000 people in two of the four major refugee camps in Maban. In addition, we serve rations to over 23,000 people displaced by the internal violence.

A variety of ministry program activities are conducted here too, and counseling services are offered at the hospital.

Akuem is located in a remote part of Northern Bahr el Ghazal State.

Samaritan’s Purse operates WASH and livelihoods programs from our base here. Through the work of our food security and livelihoods team, 600 farmers have been trained in agronomic practices; more than 14,000 children have received deworming medicine; and over 6,000 seedlings were distributed, among other activities.

Our WASH team has constructed 22 boreholes this year and built 120 emergency latrines for displaced families.

We also provide Bible literacy and discipleship programs aimed at strengthening local churches. A thousand students recently completed coursework, and more than 100,000 individuals attended screenings of the Jesus film between January and November 2014.

Samaritan’s Purse has a base in Juba, South Sudan’s capital.

Each year for the past four years, we have provided a week of free-of-charge cleft lip surgeries at the Juba Teaching Hospital. This year, during the first week of November, our international medical team performed 56 surgeries, including the first two cleft palate surgeries ever in South Sudan.

Please continue in prayer for the people of South Sudan and our staff who serve them. Pray for peace for this troubled nation, and that many would come to faith in Christ.

South Sudan Relief Samaritan's Purse has been helping the war-ravaged Sudanese and South Sudanese people since 1997, providing food, shelter, clean water, medical care, and other aid in crisis situations. Your gift will help provide desperately-needed relief to those affected by violence and poverty in South Sudan.
South Sudan Relief - 080161
$
Donate