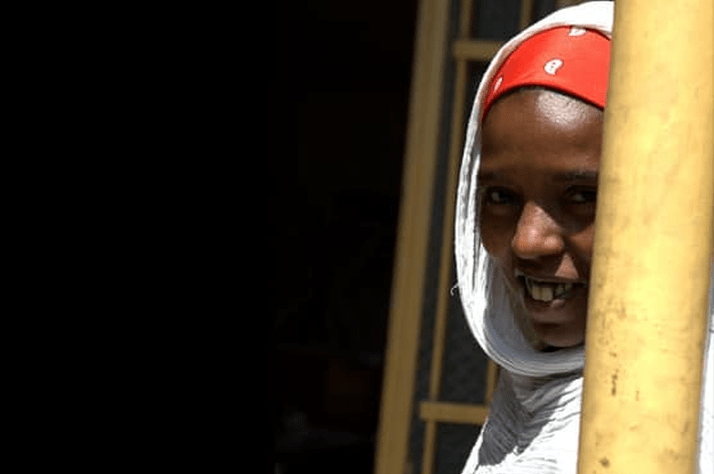 Thanks to Samaritan's Purse partners in Ethiopia, Aisha’s life of prostitution, abuse, and fear has been restored to hope.

How many “second chances” should a person get?

That’s the number of chances Aisha (her name has been changed to protect her privacy) needed before she could trust her future to a ministry in Ethiopia designed to help women escape prostitution.

For many marginalized and vulnerable women in developing nations, prostitution is a huge danger. For example, in Thailand, it has been estimated at least 200,000 women work in prostitution. And at least one-third are younger than 18. In Ethiopia, poverty is driving many women to large cities, where a lack of education means they often find no source of income other than prostitution.

Aisha’s childhood home became sexually abusive after her father died and her mother remarried. Aisha’s cries for help were dismissed by her mother, who even hit her with a stick.

Forced out of her family and her home, Aisha turned to the streets of Ethiopia’s capital, Addis Ababa, and to prostitution. She eventually finding herself pregnant at age 14.

It was at this lonely and desperate time that Aisha encountered a Christian women-at-risk program just as it was beginning to reach out to women on the street. Samaritan’s Purse, and Canadians like you, financially support the program.

Through intensive trauma counseling, rehabilitation activities, skills training and sharing the Gospel, the program helps women trapped in prostitution find a safe, honorable way to generate income or develop a small business. When necessary, the ministry also offers day care and funds for schooling while young mothers go through rehabilitation.

Aisha was intrigued by everything the program had to offer, so she enrolled.

However, her past was so painful that she walked away, again and again, rather than risk revealing and confronting the horrible memories and emotions brought up by the counseling.
“The trauma I had experienced was not accepted by my mother,” she remembered thinking, “So how could I expect others to accept me?”

But staff involved with the ministry were patient and after eight years of repeatedly returning to the street, experiencing the death of her mother, and an increasing feeling of loneliness, Aisha finally recalled the prayers she heard the staff pray to a God who promised new beginnings.

Aisha asked this same God to give her one more chance in the program and, when she returned, she was welcomed to its halfway house.

There, Aisha was nurtured and encouraged by the team members she had come to know over the years of false starts.

“I saw God not necessarily through words, but through the love of the team,” she recalled.

Healing began when Aisha finally felt able to share her story with a counselor. When the overwhelming response was acceptance, the walls around her heart began to crumble.

Today, thanks to the love and support from the dedicated team of caregivers, Aisha’s life has been transformed. She has become a Christian and is working as a counselor with the same rehabilitation program in Ethiopia.

By supporting Samaritan’s Purse-financed programs such as this (which has helped restore more than 1,000 women from a life of prostitution), you can help women leave behind the violent, unhealthy, and demoralizing world of prostitution.

Aisha draws on her experiences as she reaches out to others.

“I was one of the first girls the ministry worked with, and I know how difficult I was, but I am so thankful that God kept filling up the team members with His love, because they never gave up on me,” she said.

Women's Projects The hardships women in the developing world face often leave them without hope. Through your generous gifts, Samaritan's Purse is working to restore the hope of women through programs aimed at increasing literacy, providing maternal health care, teaching livelihood skills, and stopping trafficking and prostitution.
Women's Projects - 080401
$
Donate

Every day, vulnerable women, children, and men are being lured into terribly unjust working situations. Some become victims of sex trafficking while others are tricked into working for little or no wage. Samaritan’s Purse and our Christian partners are restoring the traumatized by providing counselling, vocational training, and sharing the Gospel. We also raise awareness about trafficking, and empower families to provide income for themselves so they aren’t as susceptible to the false promises of traffickers.
DONATE