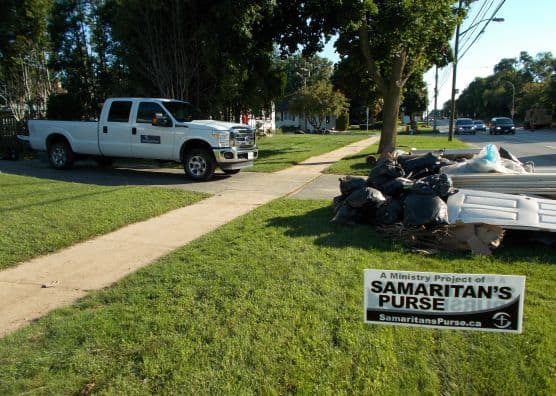 Burlington, Ontario residents were grateful for the help they received from Samaritan's Purse after the 2014 flash flood. This is a collection of stories and photos from our response. 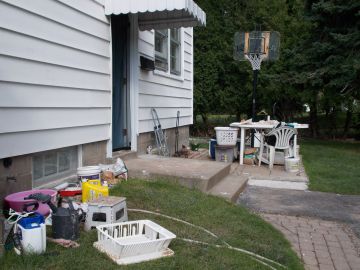 More than 13 mm of rain caused flash flooding  in Burlington, ON in the summer of 2014.

Bags of garbage covered the grass beside the road, the mound of debris easily marking the home that Samaritan’s Purse was there to help. The family’s hard work was clearly evident in the sodden wood that had been hauled outside and piled in the yard, and the silt-covered toys that covered the front steps. Other belongings were spread out on the grass to dry.

“When we came back, everything had been damaged,” Elizabeth Nguyen said, gesturing to the home behind her.

Elizabeth, her husband Tran, and their children were visiting extended family when the flood hit. When they heard the news, they drove back to see if their house had been affected. The police turned them away as the area was still under water.

“It was horrible. Terrible,” she said, describing the day they were allowed back into their home. “There is nothing left [in the basement], including the washer, dryer, furnace, and hot water tank.” The family had  been living without any of these amenities for over a week while they attempted the herculean task of cleaning up after all the damage.

“My husband and I, and my parents-we had to work day and night,” she said. “It is a most difficult time for us.”

However, Elizabeth had  nothing but gratitude for the help she received  from a Samaritan’s Purse volunteer team who stepped in that  week to help the exhausted family.

“God gave us a hand and a lot of hands have saved our lives. We appreciate your help very much. Keep praying for us please,” she said. “God is listening to us.”

A Good Way To Get To Know Your Neighbors

“All of a sudden on one night we got about two months’ worth of rain in a few hours,” said Joel Bootsma, pastor of Burlington Christian Reformed Church in Ontario. “Streets were closed. We had canoes on New Street here, and the rain kept coming for hours.”

One family in his congregation had at least three feet of sewer water backup in their basement. “Everything is garbage there now,” he said, shaking his head. “Our neighbors here [by the church] had at least seven feet of water, up to the second floor. Our parking lot was covered in at least three feet of water. It knocked down fences, trees fell down but  somehow our basement stayed dry.”

Seeking a way to get involved, the church eagerly responded to the Samaritan’s Purse call for a host church for our mobile Disaster Relief Unit (DRU) and team. Samaritan’s Purse has three Disaster Relief Units, which are tractor trailers outfitted with essential disaster recovery equipment including generators, pumps, hand tools, and safety gear for volunteers. They  also serve as volunteer coordination centers, and are  equipped with self-contained offices, communications systems, and other supplies.

“It helps us,” Pastor Joel went on to say. “We’d like to be able to help our neighbors and help our community but we don’t know how to start helping everybody. Then you guys come with this big trailer, and know how to start.”

He noted the strong enthusiasm from church members to work with Samaritan’s Purse and allow the DRU to be set up in the parking lot. “Everyone just said yes, of course, let’s move it in as quick as we can. It was exciting to see the enthusiasm from our church.”

“We sent a team to High River, Alberta,” the pastor went on to say. “Everyone was able to take time off work to go to spend some time up there.”

Standing in the formerly  flooded parking lot, near one of the hardest hit streets, Joel urged everyone: “Come volunteer-help us out! You’ll be blessed by working with other people and it’s a good way to start getting to know your neighbors.”

On August 4th, 2014  Burlington received approximately 13 cm (5 inches) of rain over the course of an hour. The flash flooding affected more than 1,000 homes, mostly in the south end of the city between Queen Elizabeth Way and Lake Ontario.

Samaritan’s Purse coordinated a response  with local and provincial officials as well as World Renew (a Burlington-based disaster recovery organization associated with the Christian Reformed Church denomination) and other NGO partners in the area.

Samaritan’s Purse mobilizes specialized staff and equipment as well as hundreds of volunteers when natural disasters occur on Canadian soil. We provide emergency aid and help with cleanup in the wake of severe wildfires, floods, hurricanes, tornados, and more.

STAY IN THE KNOW