Cleft lip and palate surgeries in South Sudan are restoring health and hope to people who’ve been excluded from society.

MRCH, 2016—As 8-year-old Kua plays soccer with his many friends, no one would ever guess that just two years ago he was sickly and unpopular.

Born with a cleft lip, Kua often suffered from sinus problems and other infections. His peers were frightened by his appearance and did not want to play with him or eat with him. 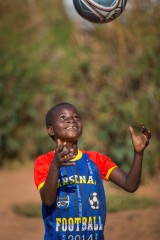 Kua is now free to play the game he loves.

All that changed when a volunteer medical team assembled by Samaritan’s Purse surgically repaired his lip in Juba, South Sudan’s capital, in 2013.

“Before the surgery, his friends feared him,” said Sarah, Kua’s mother. “Now they like him. They play with him.”

His story represents one among a total of 261 cleft lip surgeries that have been performed by Samaritan’s Purse teams in South Sudan since 2011. Our first two cleft palate procedures were performed last year. Not only do the free-of-charge operations improve patients’ health, they open up new opportunities for them in society.

In South Sudanese culture, a baby born with a cleft lip is often seen as an evil omen, a frightening sign of divine or demonic punishment. When patients arrive at the hospital, they share similar stories of shame, embarrassment, and ostracism. Many are named Machiek, meaning ‘deformed.’ Older adults tell of being shunned for decades. The mothers who bring infants speak of abuse aimed at them “How could you give birth to such an ugly child?”

But, after surgery, the boys, girls, men, and women who’ve been given new smiles return home with a brighter future. They are integrated into society—filled with hope for new relationships, new educational opportunities, and more.

They are even given new biblical names such as Daniel, John, and Mary to replace the shame their old names often imply.

“They get to go home to their villages, and they can show their faces without shame,” said pediatric ICU nurse Shannon Kyle, who has participated in the program for three years. “They don’t have to hide in their tents or their huts.”

Hawa’s son Alrashid is another of the hundreds of patients who have been helped by Samaritan’s Purse. As any mother would be, she’s overjoyed by the results she’s witnessed.

“My son is now OK. He goes to school; he plays with friends,” she said. “Before the surgery he used to become sick. Now there are no more fevers.”

During the first week of May 2015, dozens more patients will receive this life-changing reconstructive surgery in Juba.

Medical Care Projects Your donation to Medical Care Projects helps Samaritan’s Purse Canada meet the needs of some of the most vulnerable people around the world providing funds for life-saving medical equipment and surgical assistance, disease prevention initiatives and community health programs and training opportunities. We also offer spiritual support and eternal hope by meeting these critical needs while sharing the love of Christ.
Medical Care Projects - 080551
$
Donate