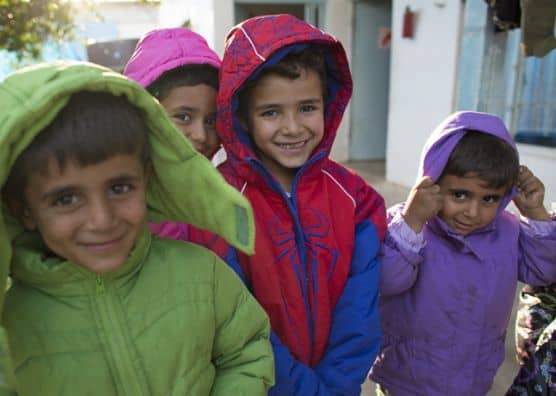 December, 2014—They had only hours to prepare to flee ISIS jihadists; sometimes mere minutes. They piled into cars or trucks and waited in traffic jams along with other terrified people. Others fled on foot for miles. Some suffered days of hunger and thirst. Whether Christians, Yazidis or others, those displaced by Islamic militants during this year’s hot Iraqi summer were fleeing for their lives and could hardly prepare for a winter to be spent in tents or unfinished buildings.

Donate now to help victims of terror in northern Iraq 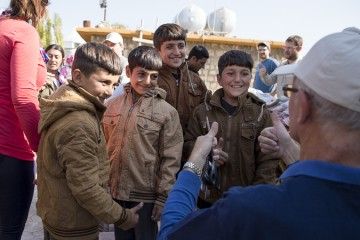 Children smile after receiving jackets during a distribution near Dohuk.

In light of the chilling temperatures these persecuted people are likely to face in December, January, and February, Samaritan”™s Purse has been providing relief—in the form of clothing, coats, and shoes, among other items—to tens of thousands of men, women, and children.

In addition to jackets bought in country, we airlifted about 80 tons of aid items from Charlotte, North Carolina, to Erbil, Iraq, in mid-October. Most of the items were children’s clothing and coats, but blankets, heavy-duty plastic (for insulation), kitchen kits, hygiene kits and a small number of sleeping bags were also onboard.

Kazi, one of the beneficiaries,  fled with his family and a brother’s family from Sinjar to Erbil. They are now all crammed into a third brother’s small home.

“We saw a lot of fighting, a lot of blood,” Kazi said. “We left everything: our houses, our cars, our jewelry, even our land. We just came with the clothes we had on.”

His children and his brothers’ children received coats from the airlift, among other items provided to them by Samaritan’s Purse. They were thankful, but, like many other displaced families, they still face great uncertainty about the winter and the future beyond that. Kazi said he would like to return home but that seems unlikely right now.

“All my hope for Iraq and my family is for peace,” he said.

Many children in need

Many other families fled from Sinjar to areas near the city of Dohuk. A couple of weeks ago, Samaritan’s Purse did one of our largest distributions of clothing at a tent camp of 12,000 families. We have also done significant distributions in Erbil and the Chamchamal area.

Earlier in October, we worked with a local partner, Pastor Samir, to organize a blanket and jacket distribution to displaced families in the small, historically Christian village of Enishke, about an hour from Dohuk. A mix of Yazidis, Christians, and Arabs came to receive much needed help. Many of the kids were only wearing a thin shirt and pants or dresses.

Bassam and his family escaped ISIS with their lives but now must figure out how to survive the winter in unfamiliar surroundings. New jackets from Samaritan’s Purse are a good start.

“I feel good with this jacket because the winter is very cold here,” he said.

The boy fled with his family of seven from Sinjar in August and was trapped, along with thousands of other Yazidis, on a mountain for six days. They had only a bottle of water to split between them.

Finally, the U.S. Air Force dropped food and water to them, and a path was opened for their escape.

They fled to Eniske and joined hundreds of other families who are surviving in tents or abandoned buildings, relying on the generosity and hospitality of their local Christian hosts and international support.

Samaritan’s Purse will continue providing desperately needed winter clothing to those displaced by ISIS. As our staff members hand out jackets, clothes, blankets, shoes, and socks, we do so in the Name of Jesus, and beneficiaries notice. Many are softening to the love of God in Christ.

Pastor Samir said some displaced families are telling him, “Without Christian support, no one would take care of us.”

Pray for the Middle East

The situation in northern Iraq remains tough and is likely to continue worsening—there are few jobs to find, the displaced are running low on cash (if they have any at all), host communities are stretched to the limits, and there aren’t many good solutions on the near horizon. Even in best-case scenarios, people are not likely to return home for many months.

Please pray for an end to the violence in Iraq and an end to the conflict in Syria that helps fuel it. Pray especially for hearts around the Middle East to be opened to the powerful truth of the Gospel. And continue to pray for Samaritan’s Purse and our partners as we seek to provide relief to displaced and refugee communities around the world.